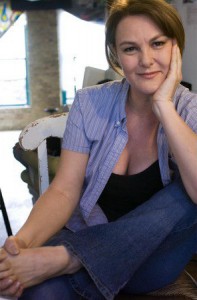 Nancy Howland Walker is a SAG/AFTRA actor, writer, teacher, and trainer. She has appeared in hundreds of commercials, videos and live industrials, and has been performing, teaching, directing, and producing improv since 1989.  She has written and performed comedy shows for businesses all over the country, and has run casting sessions on three different continents. Nancy has done corporate trainings for major businesses across the United States, including McDonalds, Oxford Instruments, and the Wrigley Company.

Nancy’s specialty is improvisational theater – she has always loved improv’s powerful creative energy which binds the actors and audience together.  In Boston she was the Artistic Director of ImprovBoston (New England’s longest running comedy troupe), The Next ImprovBoston, Picture This! and TheatreSports of Massachusetts. In Chicago, she has performed with The Free Associates in the heralded improv shows Cast on a Hot Tin Roof, As We Like It, and Pick-a-Dick, to name a few, and with Chicago Comedy Company. Nancy was head of The Free Associates and ImprovBoston improv schools, and has taught for Second City, Players Workshop of the Second City, at festivals and for groups all across the country.

Nancy is proud to have been one of six Americans sent to France for the 6th World Cup playoffs of the international Improvisational Theatre League, and one of eight improvisers representing the United States for the Just for Laughs Festival in Montreal. She knows Mickey Mouse personally, after having performed improv on a Disney Cruise ship for an entire winter. Nancy’s extensive improv experience is in short form, long form, competitive, and extreme long form narrative improv. Nancy stretches the traditional bounds of improv by creating shows that have never been done, such as MUSICAL! the musical (the country’s first two act modern Broadway styled improvised musical) and Awake in the Night (the country’s first two act improvised drama).

In 2000, Nancy studied Buddhism, went on a retreat to Zen Mountain Monastery in upstate New York, and was hooked.  Buddhism makes spiritual and practical sense to her, and fits very nicely with how she lives her life as an improviser.  Both deal with existing in the present moment, and being fully aware. In 2002, Nancy joined Marshall Stern  in creating a complete six level improv curriculum for Players Workshop of the Second City based on Zenprov. Marshall and Nancy co-host the Zenprov podcast which is available for free on iTunes.

Instant Songwriting is years in the making – Nancy has performed short-form and long-form musical improv since 1989. She has sung short-form musical improv games with ImprovBoston, the International Improvisational Theater League, TheatreSports, Just For Laughs, and the Disney Cruise Line. Nancy has also sung in long-form improvised musicals with ImprovBoston and the Free Associates (Divamatic, an improvised cabaret), and in 1998, Nancy created, produced, directed and performed in MUSICAL! the musical, the United States’ first completely improvised two act modern Broadway style musical. It was a critical success – The Chicago Tribune called it “quite remarkable,” the Sun Times called it improv’s “final frontier,” and New City wrote,

Anyone who might accidentally wander into the Royal George Gallery Theatre after this fully improvised, two-act musical has begun might think they’ve stumbled upon a polished, Broadway-bound show on the emotional level of “Les Mis.”

Nancy has taught musical improv for professional and student improvisational groups, at schools from elementary level to collegiate, and festivals all over the world since 1993. Her classes are often packed and are always well-received.

“People snuck into Nancy’s full to the brim Song Improv class because word of mouth about them was so great! I sat in on one of the classes (as producer of the Fest) and was impressed by Nancy’s teaching style, her great personality and knowledge of the subject.”
– SUSAN SANTANIELLO, Producer, Funny Women Fest

As a full time professional improviser, Nancy leads an interesting life. She is the Executive Director of Chicago Improv Associates which she runs with Marshall Stern, offering improv-based entertainment and corporate training.  Nancy teaches improv for Celebrity and Azamara Cruise Lines, which means she travels all over the world, spreading the gospel and joy of improvisational comedy. She helps train Illinois Police in Crisis Intervention, role-playing as consumers who are having a psychotic break of some kind. Nancy’s improv skills have helped her as a medical mystery shopper (going in to doctor offices as a secret patient agent and evaluating the experience), doing corporate role-play (from acting like actual difficult employees so supervisors can practice giving them reviews, to being a VP of Marketing of a Pharmaceutical company for coaching purposes), and being a standardized patient for Northwestern Medical School. These are normal gigs compared to doing  Sonny & Cher, Lucy & Ricky, and Head of the Table jobs (where you squat under a buffet table with just your head sticking out through a hole in the table)! What? And give up show business?!